The 8-bit line-up of Sonic games might not seem so worthwhile on the surface; surely they pale in comparison to their 16-bit, original, main series counterparts. Truthfully, I can’t much defend them from this scrutiny entirely, but there is some worthwhile stuff going on in these to merit discussion. The 8-bit series all begins with Sonic the Hedgehog for Sega Master System and Game Gear, released a few months after the Sega Mega Drive counterpart. With the series still in its infancy at the time, this title tries a handful of level tropes not seen in later release and, while not all of these pay off, they allow the overall package to feel oddly refreshing. So, alongside the original Sonic game, lets start adding it’s stages to the list.

This is a list in the making. To see the beginnings of our list, where we ranked the stages from the 16-bit version of Sonic the Hedgehog, please follow this link here! 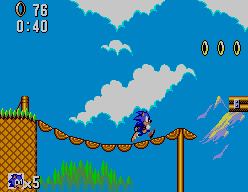 We have a new bottom lister already! Bridge zone is at the bottom of the list, most assuredly standing as the worst level in Sonic’s 8-bit debut. I hate being so harsh on it, but this is all down to one big issue; Act 2 is a self-scrolling stage meaning Sonic’s speed is checked from the start, with the left side of the screen trying to kill him and the right restricting his movements. This style of stage isn’t anything new to platforming games, but for a character sold on how fast he can move, this design just doesn’t work for him. Act 1 is a more familiar outing, yet there’s a lot of slowdown across the falling bridges and plenty of nasty placed badniks to frustrate. Aesthetically also, its hardly a departure from Green Hill before it. Shame though, as the music in this one is great!

Next, we have lovely Labyrinth zone returning for more. This is one of three stages that have direct counterparts in the Mega Drive edition, however this version isn’t much of a maze, but more a singular path to the goal. It ranks so low for its linearity, which wouldn’t be such an issue if not for the entire thing taking place underwater causing some major slowdown. I guess I’m not being wholly fair, for there are little side passages to explore, tempting us to risk drowning for the treasures at the end of them. Sadly, there are no extra lives to discover, more like 10+ ring boxes, which is very disappointing. Even the Chaos Emerald in this stage is along the main path, so really don’t bother exploring at all.

The second stage with a direct counterpart, the best zone in the original Sonic game is sadly one of the more underwhelming stages of the 8-bit game. At the very least, unlike the other two counterpart stages, the music matches the original. Act 1 is pretty much a long path that places enemies in our way every so often alongside the occasional spike pit, without branching pathways or diversions. The boss isn’t much either; we could be forgiven for thinking it has no strategy at all, as Eggman just flies back and forth for Sonic to rip apart. This still ranks higher than Spring Yard though, because Act 2 has Sonic explore a network of caves, giving this 8-bit counterpart a fun act with more of an identity of its own.

I wanted to rank Jungle higher on this list. I really like this zone, but this I fear is against better judgement. Its quite difficult to beat actually, being more a life sponge than one might realise. Its got such a nice aesthetic for a 8-bit stage. However, the badniks in the waterfalls can kill quite unfairly and the slowdown on the waterfalls is fairly detrimental to nailing the tight platforming. Act 2 tries something different entirely, the goal of the stage lying at the top of a waterfall, overthrowing the typical left to right objective for a bottom to top one. This is a really cool stage also, but again the game’s limitations are torture for the small platforms and falling means we start the level all over again. I’m used to it now and really enjoy it, but I can’t deny a newcomer to this stage might be turned away by it entirely. 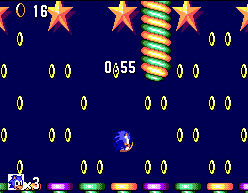 The 8-bit bonus stage ranks one lower than the 16-bit special stage, because ultimately there are no Chaos Emeralds to be earned at the end of them, diminishing their significance. These stages fulfil the casino aesthetic for this game, with bumpers galore throwing Sonic about in pursuit of goodies. To enter these stages we need to finish an act with between 50-100 rings, which is fairly easy to do more often than not. The rewards to be had here are only lives and conitnues, but for a game which can be quite tormenting, building a stock of these is really appreciated. They’re pretty fun to play through and a nice breather between each stage.

Ever thought the ending of the original Sonic game was somewhat underwhelming? 8-bit Sonic seemed to think so, and so we receive this kick-ass stage to end our adventure. Eggman escapes to his giant blimp and Sonic must tackle stormy skies, through a launch pad and across the entire expanse of an airborne base (Sonic 2 Wing Fortress style) to breach inside and face Eggman one final time. This place is tricky too, the first act utilising great big electrical pylons (used one more in Sonic CD’s Wacky Workbench). Act 2 is even trickier with nary a ring in sight. The blimp is littered with weapons and sways precariously through the skies, meaning this is a huge challenge to overcome, more so than the final boss waiting inside. This place is cool and only does not rank higher because, to obtain the Chaos Emerald hidden in the stage, we can essentially skip the entirety of Act 2 by utilising some cheap platforms beneath the aircraft.

The last stage to be ranked from Sonic the Hedgehog (8-bit) is the third to have a 16-bit counterpart, and its actually ranked higher than that said counterpart! This version of Scrap Brain is not the final stage here and as such plays around with a few interesting ideas instead. All three acts take place within the same aesthetic and, from Act 2 onwards, makes Eggman’s lair a devilish maze to get lost inside. There are multiple rooms to figure out and we have to use lights in the background to figure out how close we are to getting to the top of the base. This is a well designed level, with the challenge occurring from figuring out how to get out without punishing us with tons of hazards or bottomless pits. There is no boss here, but that just makes Eggman’s escape to his blimp all the more surprising.

So, none of the 8-bit stages have breached the top three in our stage list, but we shall see how long this lasts as we continue in this endeavour. Next, we are covering Sonic the Hedgehog 2. No, not the one that’s regarded as the best in the series, I mean the 8-bit one, which is a vastly different experience. Until then, check out the start of our list about the original Sonic’s stages here.