Welcome readers to 2017! We’ve got quite the year ahead in the video game world, mainly the whole virtual reality scene is out and could potentially change the way we perceive video games entirely. Of course let’s not forget Nintendo and their next console releasing (supposedly) early this year; the Nintendo Switch may be a game changer in its own right. However these are things that have yet to pass or are still in their infancy. Before we dive into this new and exciting world let’s look back one last time, at the games of 2016.

Now these aren’t the greatest games of the year or the most popular, but simply the games I’ve invested most time in during 2016. Many of them weren’t even released in 2016 but still they managed to steal my attention more so than any other. So without further ado which games were, for this blogger, ‘the’ games of 2016?

Indeed I’m very late to the party here; GTA V was first released in 2013 and then updated to modern consoles in late 2014. Its massive world and playful scenarios took this fan favourite franchise to a whole new level, and that’s even before considering the impressive GTA Online mode. Yet why was this one of the major games for us in 2016? For starters, I finally finished the main campaign after starting over a year beforehand. Secondly, our household have been playing this series ever since GTA III yet I’d never fully committed to finishing one before (I fell out quite dramatically with a very early mission in San Andreas…). But thirdly and most importantly, my time with this game made me realise how out of touch I am with the current gaming climate and that I rely so much on the series’ of my childhood without branching much away from them. My time playing video games has become scarcer this year, but if anything GTA V has taught me to appreciate sparing some time to try something new. If only the other games on this list followed this ideal…

Check our post on why it took so long for me to finish this game with the link here.

Another game not actually released in 2016, I began playing FFXIV when I started dabbling into each game in the Final Fantasy franchise (a task inspired with my at the time obsession with Final Fantasy Record Keeper). While indeed this series is nothing foreign to me, the idea of playing online in an MMORPG was a little daunting for me; online gaming isn’t something I’m used to. However stepping into FFXIV was phenomenal. The game world is so immersive, I’ve spent hours at a time simply running menial errands for the inhabitants of Eorzea and enjoyed every last moment of it. I suppose it’s typical of the genre to keep new features flooding in, but after 30+ hours of playing there are still plenty of fundamentals to learn and discover. I’ve barely scratched the surface of this game but indeed it has made me appreciate a genre that initially I thought I wouldn’t much enjoy. For me FFXIV was the biggest leap for me during 2016 and I imagine I’ll be picking it up again at some point in 2017 also.

I wrote a piece on this for our Final Fantasy Records feature. You can find the piece on FFXIV here. 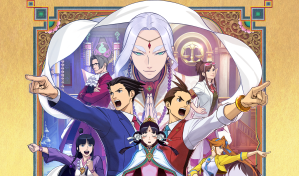 Finally a game actually released in 2016! As a long time Ace Attorney fan I became obsessed with this game like no other this year. The title is the perfect culmination of everything the fans have come to love about this often overlooked series. The only downside I can see is that it isn’t the best game for first time players to jump into. But for the fans, if we thought the conclusion of the original Phoenix Wright trilogy was as satisfying as it could get, Spirit of Justice evokes the same emotional peaks of yester year. I was glued to my 3DS for days at a time; it seemed every spare moment was spent finding out what was next for the Wright Anything Agency. This game stands as the one I was most engrossed with of the year.

We celebrated our time with Spirit of Justice by ranking the appearances of the Ace Attorney prosecutors throughout the main series. Click on the following links to read Part 1 & Part 2.

Pokémon Go is altogether a different game to the others on this list, mainly because it’s not really got much gameplay about it. But boy did this game steal the show in 2016, everyone was playing it and everyone was talking about it. The news ran features on it, one week positive the next negative, people were finding dead bodies on their quests, others found they were able to leave the house and be sociable despite their disabilities and anxieties. Pokémon reached a level of popularity only rivalled by its origins in the late 90s. For me this is a big deal; one look at this blog should be enough to tell I am one major Pokémon fan. I was for a time posting everyday on my adventures finding Pokémon around the city. The commute to work has not been the same since and, while I enjoyed walking before its release, I’ve now explored areas of Sheffield I never would have thought about beforehand. It’s definitely the biggest Pokémon release of 2016 and even though it’s now taken a back seat for Pokémon Sun & Moon, none of us can forget that however temporarily it was, catching Pokémon was all any of us wanted to do.

Of course we posted about Pokémon Go earlier this year also, talking about how we could improve as trainers despite a distinct lack of gameplay overall. A link to the page can be found here.

Our final game of 2016 is both a latecomer for this year and again not a game released in 2016. Indeed it is the only game on this list we haven’t posted about through the year. However it gains a place here for two reasons: firstly it has overcome my intense obsession with Final Fantasy Record Keeper as the game I play daily and secondly it has reignited a love with the card game that has led me to pour hours into the real physical card game. Indeed I would think any gamer today has a game they log into daily but Yu-Gi-Oh! has made me enjoy doing so once more after my last daily mobile game started to feel more like a chore than a treat. I have yet to drift into online play but that is only because of how enjoyable it has been just to re-duel all the old Yu-Gi-Oh! characters me and my brother remember so fondly from childhood.

Look out in the near future when we get around to posting about this new obsession.

Thank you for reading as this concludes ‘Ratchet’s Top 5 Games of 2016’. Which games had your attention throughout 2016? Have you learnt anything through playing them? Did you find a new obsession or rediscover an old one? Leave any comments you might have below. Enjoy 2017!