The most startling aspect of Pokémon’s legacy is simply that it was born perfect. The formula has received numerous bells and whistles over the years, but at its heart Pokémon is still the rock-paper-scissors, turn based RPG series it was when it first began. So how has the same gameplay endured for over two decades?

Largely because the series today has gained a huge metagame following, which Nintendo and Game Freak have embraced more so with each new generation. Since communication went global in Pokémon Diamond and Pearl, we’ve been seeing more of that competitive scene trickle its way into the main titles. Now there is so much to think about when creating a team. There are currently 721 creatures to choose from, with 18 types to master and overcome. Each Pokémon has up to three abilities they can utilise that give them extra boosts or constraints and four move slots to fight with. Yet if that kind of variety wasn’t enough, every Pokémon has a nature that indicates which stats they will excel in over others and two hidden values that players can take advantage of to get the best out of each

creature. These last two hidden states are known as EVs (Effort Values) and IVs (Individual Values), values that have been around ever since the first Pokémon games. These, for example, are what make one Charizard stronger than another at the same level. It takes a lot of work to bring together a perfect Pokémon team that can tackle any situation and thankfully the latest generation of Pokémon X and Y has streamlined almost every aspect meaning even casual players can get a taste of the big leagues. However what helps makes the series remain so gripping is that, despite all the variety, we can never be prepared for everything in the game, there are always surprises in store and with variables such a critical hits and accuracy playing their part too, it makes Pokémon perhaps one of the most intricate RPG experiences in all of gaming. Indeed the series may not have changed too much since its grass roots, but the layers its added to the battle system have never ceased to keep things interesting.

So indeed the main Pokémon titles have proven a success but things haven’t stopped there; the series has branched into multiple spin-off titles, a widely popular anime and film series, one of the biggest trading card games in the world and amassing merchandise galore. So big is the Pokémon web of affairs there’s even a Pokémon Company that handles the majority of non-game content. Despite being one of Nintendo’s more recent series, only Mario beats it out as being the best-selling series the company has under their belt, selling over 277.52 million units overall.

The future of Pokémon promises to be an interesting one and this year, the series 20th anniversary, rumblings of the seventh generation are around the corner. But there’s something a little more interesting in the works at the moment. Pokémon Go anticipates bringing the series into our everyday lives and while information is still relatively sparse, from the trailer revealed late last year, it looks to herald a whole new era for the series, one that will hopefully secure its place in the future for more generations to come.

If you haven’t seen the trailer for Pokémon Go yet then definitely check it out here. For me the focus on the first generation of Pokémon here shows Nintendo want to bring back an audience who grew up with Pokémon to begin with. 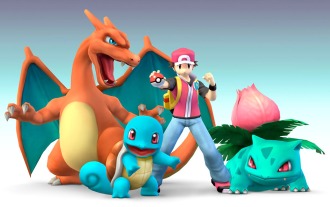 Usually at the end of these things I like to make note of how this series is represented in Super Smash Bros. As this is Pokémon, I think a Pokédex itself is necessary for the more important roles. Pokémon have appeared in all shapes and sizes in the series but largely as summonable allies from the items Poké Ball and the Master Ball, the latter of which was added into the latest iteration of Smash. Furthermore the stage Saffron City in Smash 64 is based on the same city found in Pokémon Red and Blue and the character of Pokémon Trainer is based off the protagonist here also.

One thought on “Pokémon Red and Blue – Legacy”