Star Fox, (known as Starwing in PAL regions to avoid confusion with the German company StarVox) was first released in 1993 as a game that broke all the expectations Nintendo had for the Super Nintendo console. Thanks to the Super FX chip inside the cartridge, the SNES could render 3D graphics, a revolutionary technology that at the time was hardly seen before. Essentially to those early 90s gamers, this game looked freaking awesome. But it wasn’t Nintendo who came up with the goods here but a group of British programmers. Argonaut Games had been working with Nintendo on rendering 3D on the NES but when Nintendo said they weren’t satisfied with the result, the company said the only way they could improve their game was to be able to build custom technology for the next console, the SNES. Thus with a huge wad of cash from Nintendo the company set about programming what became the Super FX chip. So powerful was this chip that it was often choked the SNES was just a box to hold it in place. With Nintendo dealing with the game’s scenario, including the cast of characters we know today, the game released to become a smash hit and a sequel was almost immediately commissioned.

That’s pretty much where Argonaut was left behind. Star Fox 2 was scheduled for a 1995 release on the SNES but despite the game being very near completion, Nintendo slammed the brakes on it and thus it never released. The official reasoning behind this decision was unclear though many speculate with the Nintendo 64 coming out the following year, and with Sony’s PlayStation, a machine capable of incredible 3D graphics, that the game would ultimately be obsolete in a very short time. Miyamoto himself has since stated he wanted to move away from 3D on the SNES and work on the future of gaming. However this doesn’t mean we still can’t play the game and a ROM exists on the internet which is entirely playable from beginning to end. This however is still not the final product as revealed in 2015 by Nintendo Life during an interview with  programmer Dylan Cuthbert, who revealed a finalised ROM exists of the game which contains many elements still missing from the ROM we’ve had access to for years. Ultimately with the cancellation of Star Fox 2 came the end of Argonauts involvement with the series and now due to legal disputes between the two parties its highly unlikely we’ll ever see either the original game or its unreleased sequel on Virtual Console anytime soon. However Star Fox didn’t end there…

Star Fox 64 (titled as Lylat Wars in PAL regions). Released in 1997, the game is said to contain 30% of the ideas that Star Fox 2 was to introduce. Andross again returns to siege Corneria and conquer the Lylat System and it’s up to team Star Fox to stop him. It seems the game acts as more of a reboot of the original title than a sequel, and what a reboot it is! The game is undisputedly the best in the series and is often regarded as both one of the best N64 games and one of the best Nintendo games of all time. The title introduced many dynamic gameplay elements including All-range mode, the Landmaster Tank, Team Star Wolf and a revised world map which players had to discover for themselves the unique methods on how to access the more difficult routes. With a multiplayer mode in also in tow we’d think all the cinematic excitement would have been enough but the game went one step further, in being one of the first games ever to utilise voice acting to bring the entire cast to life. No line was left without a character to speak it which, while a feature we take for granted today, in 1997 was a huge deal. Honestly I could sit here and praise this game all day; perhaps the series would be better off if I did.

Star Fox 64 has for many, never been followed up by a true sequel. In 2002 Star Fox Adventures was released on Nintendo GameCube but Fox was no longer in the Arwing and instead on foot in a platforming adventure. The game was originally a Rare developed title known as Dinosaur Planet to be released on the N64, and the last the company would develop for Nintendo before their acquisition by Microsoft. However when it was noted how similar the title character was to Fox McCloud the somewhat unpopular decision was made to adjust to title to the Star Fox canon and develop was shifted onto the GameCube. While the game was praised upon release it left a lot of fans feeling let down due to such a dramatic departure from the established formula. Star Fox as we knew it thus wouldn’t return until 2005 when Namco took the reins for Star Fox: Assault. Sadly while the Arwing was back, it was met with several on-foot based missions that ultimately let the game down in a big way. Following this was Star Fox: Command for Nintendo DS which again acted as a series spin-off by taking the formula in a more tactical shooter direction. While none of these games are considered bad by any means, they haven’t managed to recapture the spirit of either Star Fox or Star Fox 64 and despite the latter being remade for Nintendo 3DS in 2011, our thirst for more has still to be quenched.

Whether the upcoming Star Fox Zero (titled Zero as it is neither a sequel nor a reboot, but a collaboration of all things Star Fox to this point), will bring Fox back to his glorious roots remains to be seen. Either way the series has managed to retain a strong fan base over the years despite so few releases and stands beside Metroid as one of the most requested titles for future releases. With a new entry on its way later this year, perhaps the future of Star Fox will be looking much brighter for the foreseeable future.

If you’d like to find out more about the development side of the original Star Fox check out this link on Eurogamer.

Starwing also made a cameo appearance on the Wii title WarioWare: Smooth Moves as one of the microgames, alongside another one of Nintendo’s characters. 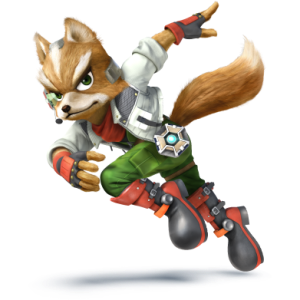 Smash fighters Fox McCloud and Falco Lombardi first originated in the original in the original Star Fox game. Their nemesis Andross also appears as an Assist Trophy starting in Super Smash Bros. Brawl in sporting his original SNES appearance. While no stage in Super Smash Bros. is directly based on anything from this game, the settings of Sector Z, Corneria and Venom all can be first found in this game. Likewise elements that appear in the stage Lylat Cruise can also be 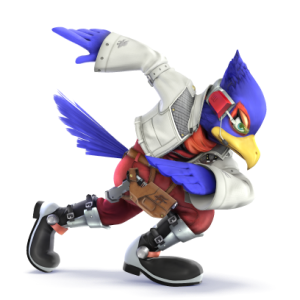 found in Starwing. The item Smart Bomb which first featured in Super Smash Bros. Brawl originates here also but was known as the Nova Bomb at this point in the series. The series signature spacecraft the Arwing has appeared in the background of every Star Fox stage in Super Smash Bros. and fellow pilots Peppy Hare and Slippy Toad have cameos during special taunts on the Lylat Cruise and Orbital Gate Assault stages.

One thought on “Starwing – Legacy”