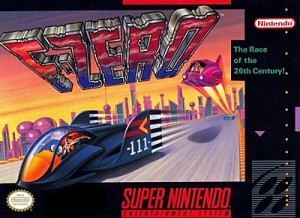 F-Zero is of a rare genre not often delved into in the gaming industry; a single player racing game. It is perhaps the first thing one may notice when starting the game up in this 21st century world. Sure in 1990 we were more used to making a 2-player experience ourselves by taking the things in turns so perhaps that was what Nintendo were thinking. Or perhaps the game just couldn’t handle a 2-player environment; we don’t know it just isn’t there. So once we’ve gotten over this hurdle what does the game have to offer?

What we get is a surprisingly in-depth racing title that is easy enough to pick up but requires a lot of work to master. There are 15 courses to race on split between 3 grand prix leagues with 3 difficulty levels and 4 vehicles of differing capabilities to choose from. While this may not seem like much there is plenty on each racetrack to keep us on our toes. Each course has 5 laps and with each successive lap there is a limit to what position we can finish in, meaning that by the final lap if we don’t finish in third place or higher than it is counted as a loss and a life is lost and we must do the race over. There is also an energy meter which depletes when we take damage by bumping into other cars or hitting magnetic fields or mines. Once this runs out the vehicle explodes and we must start the race all over. If we happen to fly off the track that is an instant KO as the vehicle tumbles 3000 feet to the planet’s surface below.

Furthermore being in first place isn’t so easy to maintain as drones run the track with us getting in the way and often preventing us from reaching top speeds. Each race can be utterly brutal and unless we hone our racing skill even winning the standard difficulty leagues is a struggle. Thus what seems to be a simple racing game can actually become quite tense in the heat of the moment.

And this all works in the game’s favour, it remains an intense fast-paced ride with a killer soundtrack and each grand prix lasts long enough to feel we’re really invested in making it through. Some of the tracks are available to practice on also and there is a records mode keeping track of our fastest race times on each course. Unfortunately these modes seem a little insubstantial as the harder courses aren’t available for practice on meaning we have to try our luck in the grand prix to overcome them and records mode doesn’t keep track of how many points were earned in each league thus making it difficult to inspire

us to try harder in grand prix mode the next time. For such an intense ride there’s little to aim for aside from being able to complete the hardest difficulty, which believe me will take some practice to overcome.

Ultimately F-Zero is still an enjoyable game which despite its lack of features still presents an in-depth racing system that feels rewarding to master. Sure there is little else besides to keep us going and the lack of multiplayer will confound many of our 21st century contemporaries but otherwise it’s certainly a title worth investing some time in and still remains one of the greatest racing games the SNES has to offer.