Here we have it, the unique retro track in Mario Kart 8 and there’s only one that truly deserves to take the crown. While N64 Yoshi Valley is a mad labyrinthine rush and Wii Grumble Volcano begins to crumble away on each progressive lap, these tracks stick to the three lap structure and still bear much resemblance to their original counterparts. Only one track really shakes up the retro formula and it just so happens to be my favourite track in the entire game. 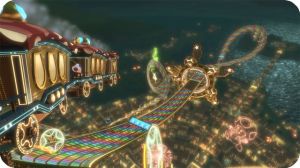 This track is simply a pleasure to race on. The bright lights of the track hovering over the night time city below evoke that magical sense of flying over London in Peter Pan. The Toad train dropping off coins before charging its way into the distance adds to this wonderment as do the fireworks that explode into popular Mario characters in the sky and then there are the bouncing Chain Chomps which show off the malleable track. The music adds to the fun and when you hear that train whistle through the sky one cannot help but be totally enthralled by the racing experience. The track is unique for me because I hardly ever want this race track to end. Alongside this, it is the only retro track to consist of one circuit for all three laps and it is hardly recognisable to its original N64 counterpart in which all three laps of this version make up simply one lap of the original. The track has been given a complete overhaul from being a rather monotonous, lengthy race where Chain Chomps cause havoc by unfairly and frustratingly racing towards us into a much shorter race that feels polished and enjoyable in every aspect. In fact the length is the only issue to be had with the track because it’s just so darn short, gliding through that finish line only feels like the start. If Nintendo were to consider an option to increase the number of laps per race in the game then this track is the one championing that campaign. Overall N64 Rainbow Road is unique due to its structure, its dramatic update and its wonderfully magical quality that makes it a joy to race on every time.

Thanks for reading this BWU and soon enough we’ll see the rest of the DLC tracks come out along with 200cc to cover. In the meantime check for a new update on the site next week.

2 thoughts on “BWU: The Unique Retro Track in Mario Kart 8”