The retro tracks in Mario Kart 8 are a bit different to the retro tracks in previous Mario Kart games. If the game wasn’t telling us these tracks originated from an earlier entry in the series then many would hardly realise this to be the case, they look and feel a lot like their newer counterparts. Even SNES Donut Plains 3 and GBA Mario Circuit for the most part don’t feel as if they have come from a 2D sprite playing field. Add to this the addition of underwater, gliding and anti-gravity racing sections and the tracks lose a lot of their retro feel. That doesn’t mean they are totally unrecognisable but there’s certainly been a lot of work done to revamp them as to go hand in hand with the new content on offer. However even with a revamp some of these tracks are still not great, so here we go for the worst retro tracks in Mario Kart 8.

Perhaps criticising a track from fan favourite Mario Kart 64 is a risky business to undertake, but there’s just something not right about the revamp of Toad’s Turnpike. It is a distorted figure of eight which uses moving traffic as obstacles to keep things interesting. It was the first of its kind in the series and ever since almost every Mario Kart game has featured a track where racers must avoid oncoming traffic. Toad’s Turnpike can be a lot of fun, taking the risk to drive through the narrow gaps between road side and traffic can be quite exhilarating and watching the person in front of you drive into a truck is always entertaining. Its simple design doesn’t really hold it back and that isn’t the issue I have with this retro course. It is the addition of gliding that lets it down here, which is also the aspect that supposedly makes this track more appealing than ever. Driving up the back of a flat bed and taking flight is ultimately the big change to this course and the chance to glide over the bridge adds a little extra joy to the experience. However what goes up must come down. This is where traffic starts to batter you senseless and while you can stave off your landing a little by boosting off the front of buses it’s all terribly unreliable and can severely cost a racer the race. Perhaps you may think I just need to get better at taking advantage of this aspect of the track but the gripes do not cease here. There are anti-gravity sections placed along the first and last corner of the track which have racers drive along the metal barriers, taking longer to make the corner but having the benefits of no traffic and coin collection along the way. However if one happens to glide too close to these barriers the kart is shifted into anti-gravity mode and latches onto the metal barrier, completely throwing off the racer who is suddenly flipped 90 degrees to the side. Ultimately Toad’s Turnpike for me is a flawed track in which it’s simple yet clever design is undermined by the gliding sections which are sadly not as well implemented as one would hope. 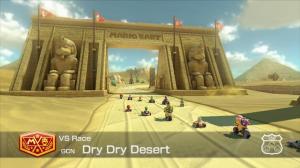 A track which is regarded as one of the most frustrating in the series history has returned in Mario Kart 8. The revamp here has certainly improved the track, but it hasn’t exactly made it great either. Where the sand pit used to suck anyone in by simply touching the rushing sand, a lengthy demise is now easier to avoid and all the nasty tornados have been removed too. However this track is just simply rubbish, it is stylistically dull and the music doesn’t help alleviate this issue either. The desert is a bland setting this time around which is a shame because Mario has done the desert theme many times now and it has never been this dull. Wide sections of windy tracks are littered with Pokey’s which if a racer dashes through their narrow arch they can grab a coin which is a nice addition, but these are tiny obstacles in the middle of a giant expanse of track. As the race progresses pillars begin to fall allowing racers to jump and boost off them, but again it is easy to miss these as the track is just so wide and monotonous it’s just easier to shut off and get it over with. Things are somewhat spiced up towards the end of the lap when an oasis appears with jet streams to boost racers forwards but these actually don’t help all too much and one might find higher levels of CPU speeding ahead by simply drifting around the edge of the water instead. The jet streams just feel slow and unsatisfying and fail to be the saving grace this track really needs. At the end of the day, this is the Dry Dry Desert not the Kind of Dry Desert, perhaps something more than an oasis was needed to truly make this track’s return worthwhile.

Coming next is the most unique track in Mario Kart 8 so keep watching this page for the update.