Ever since Mario Kart DS in 2005, each Mario Kart game has doubled in content with the addition of 16 retro tracks from the older entries in the series. Mario Kart 8 is no exception, and with the new update just around the corner it’s time to continue this BWU as we delve this time into the best retro tracks on offer in the standard game. 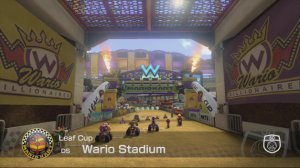 A standout track on the DS returned in Mario Kart 8 at an even higher-octane pace than the original. Wario Stadium features windy, tight corners which open up into wider spaces filled with jumps to launch off. The feature added in Mario Kart Wii where boosts can be taken when the player shakes the remote on a jump makes these segments feel frantic as we’re trying to concentrate while gathering as much speed as possible. Shaking a remote has never looked so serious. The largest changes to this track come towards the end of the lap when anti-gravity kicks in and we’re taken up a steel gangway as we avoid spinning fire bars before taking a dive into water for the final corner and gliding through the finish line. These vehicle transformations in quick succession help the track feel more varied than it originally did on the DS and keeps up that frantic feeling the beginning of the lap sets up so well. Still there’s no better thrill than firing a trio of green shells into the winding corridors at the beginning of the race and or throwing a bob-omb where there is no escape. This is a great track to really get the adrenaline going for players and definitely one of the better ones to start your play session with.

Perhaps known more popularly and perhaps more accurately as Piranha Plant Slide, this track sits racers at the top of a NES style Mushroom Kingdom before quickly diving into the dwelling of the Piranha Plants. It’s a cool setup for a stage and I really love the gliding section at the end which has racers fly through a castle gate with waterfalls streaming out either side. It’s a cool set up and kind of feels like the Piranha Plants have invaded one of the older settings in the Super Mario universe, placing cardboard Goomba at the end to try and pretend like everything is normal and they aren’t lying in wait for Mario and friends. In Mario Kart 8 the nod to the 8-bit era is more subtle, the area is a lot more detailed than it appeared in Mario Kart 7 but as a result it feels like it has a lot more life to it. However the majority of the track takes place within the pipe ways and there is a rushing current of water through most of it that propels racers forward giving this track some of the most blisteringly paced corners in the game. A huge Piranha Plant meets us at the start of this slide which starts the drifting off and often you can expect to drift the entire first segment, all while avoiding hazards and collecting the moving item boxes along the way. It’s a very exciting ride and stands out as one of the best track segments in the game. The slide continues as racers plummet into a body of water where powerful jet streams can force us from side to side or up off the track. While they don’t necessarily affect the race too much it’s a pretty cool site to fly over a giant Piranha Plant; not going to bite me today you horrible monster! This track, like Wario Stadium, is high action and non-stop thrills which is why it too sits as one of the best retro tracks in Mario Kart 8.

Check in again soon for the next part of this BWU with the worst retro tracks in Mario Kart 8.

Miketendo64! By Gamers, For Gamers